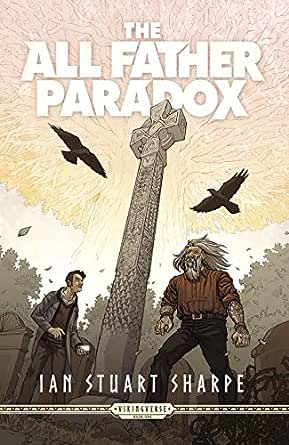 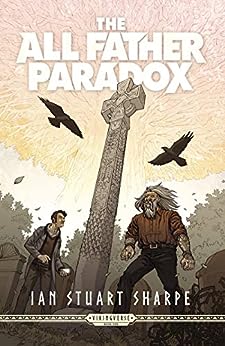 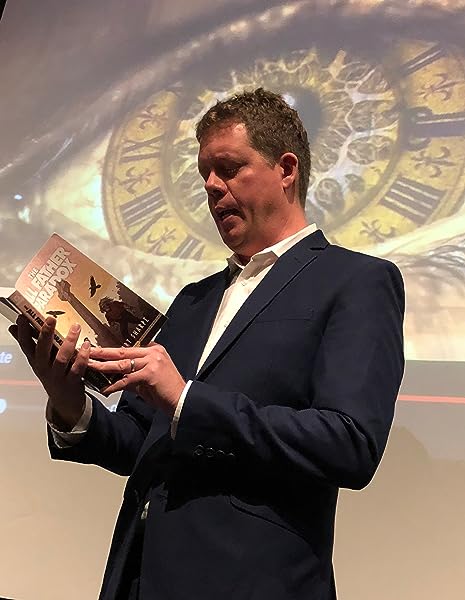 Ian Stuart Sharpe is the CEO of a tech start up. As a child he discovered his love of books, sci-fi and sagas: devouring the works of Douglas Adams, J.R.R. Tolkien, Terry Pratchett, and George MacDonald Fraser alongside Snorri Sturluson and Sigvat the Skald. He once won a prize at school for Outstanding Progress and chose a dictionary as his reward, secretly wishing it had been an Old Norse phrasebook. He lives in Victoria, British Columbia. --This text refers to the paperback edition.

4.6 out of 5 stars
4.6 out of 5
29 global customer ratings
How does Amazon calculate star ratings?
Amazon calculates a product’s star ratings based on a machine learned model instead of a raw data average. The model takes into account factors including the age of a rating, whether the ratings are from verified purchasers, and factors that establish reviewer trustworthiness.
Top Reviews

B. Cooper
5.0 out of 5 stars A great debut novel
Reviewed in the United Kingdom on 10 October 2018
Verified Purchase
I have been a fan of alternate history for almost two decades and have devoured most of the key entries in this genre. I am happy to say that Ian Sharpe has proven an author worth keeping an eye on if you like well-researched, compelling and plausible althist.

“The Allfather Paradox” takes the reader on an immersive and compelling ride through a world where Christianity does not form the basis of two millenia of Western Civilisation. Along the way, Sharpe displays an enviable knowledge of Norse mythology and Old Norse. The names of people and places echo our own world just enough to cement the willing disbelief of the reader and tantalise them with glimpses of the common roots of Old Germanic languages and modern English.

Analogues to real-world historical events and people are identifiable, leaving the reader keen to find and identify the next one in the text. There is even the odd splash of contemporary social and political commentary, which caused me a wry smile for their cleverness without their being overly polemic or preachy.

If I were to equate “The Allfather Paradox” with an already well known althist book, it would be with Robert Sobel’s “For Want of a Nail: What if Burgoyne Had Won at Saratoga”. Fans of the genre know that this book stands out for its believability, plausibility, and the depth of historical knowledge the author must have had to write it. Sharpe displays these same traits, making his debut novel well worth reading and leaving the reader hungry for the next book.

Mrs D M Buck
5.0 out of 5 stars Brilliant debut novel
Reviewed in the United Kingdom on 12 October 2018
Verified Purchase
If you like Vikings, you'll like this imaginative and authentic book.It has the usual things you associate with them - monks, longships and berserkers. And a hero to rival Ragnar Lothbrok. But just when you thought it was settling into a story of the Viking Age, you are hurled ahead, to a world that might have been. I've read a lot about Ragnarok, Yggdrasil and the Nine Worlds - I loved Norse Mythology as a kid - but seeing how the author reimagines them is a real wow. The future Midgard is like a nightmare come to life. I hope we get to read more sagas from the Vikingverse! Skål!
Read more
Helpful
Comment Report abuse

Ben simpson
5.0 out of 5 stars A fascinating, engaging read.
Reviewed in the United Kingdom on 11 October 2018
Verified Purchase
An alternative history that I certainly enjoyed. From start to finish I was taken upon a journey where I just wanted to read on and on.

Clearly a lot of intelligence, effort and research has gone into telling such a compelling story where I found myself turning page after page.

What stood out most for me was the sense of realism that was created in an unknown world that was only achievable by the author displaying a clear knowledge of Norse mythology.

A book I will happily read again and again and truly can’t wait for more instalments from this universe.
Read more
Helpful
Comment Report abuse

andrew hood
5.0 out of 5 stars A great tale, Saga-worthy
Reviewed in the United Kingdom on 21 February 2020
Verified Purchase
The All Father Paradox is not my usual taste in Norse writing. I'm more into history and historical fiction, but it's a great concept, well written and certainly worth a read. Highly recommended and I look forward to reading more from Ian Stuart Sharpe.
Read more
Helpful
Comment Report abuse

Andrew G
4.0 out of 5 stars Gripping debut novel!
Reviewed in the United Kingdom on 22 February 2019
Verified Purchase
Great debut novel. Seamlessly traversing tones of The Omen, The Hobbit and Star Wars as the book unfolds ... with the added bonus of brushing up on your Norsk along the way! Here's to hoping there's a sequel in the pipeline.
Read more
Helpful
Comment Report abuse

Richard G. T. Bailey
5.0 out of 5 stars Great Read, fun story!
Reviewed in the United Kingdom on 18 October 2018
Verified Purchase
I have finished this and I know already I will read it again. A great style, well detailed and brings the reader into the story. Well worth a read.
Read more
Helpful
Comment Report abuse

Amazon Customer
5.0 out of 5 stars Lock up your monks.
Reviewed in the United Kingdom on 10 October 2018
The All Father Paradox tells the story of an alternative history in which Vikings became the predominant culture of the western world and, it transpires, the galaxy. The story is held together by linking sections in which an unsuspecting church warden is visited by a know-it-all Viking warrior. The interplay between these two characters, who both consider themselves superior to the other, is entertaining and a welcome comic counterpoint to some weightier themes the book goes on to explore. Between these sections, the book is structured as a series of separate stories connected by theme and are set at different stages of the civilisation’s development, relating how the different characters played their part in taking the culture forward. Most of these sections are tales of travel and adventure which, in their descriptions of Viking exploration, contemporaneous Christian belief and the traverse of uncharted wilderness, display an attention to historical detail which you may not expect from a story which ends up on a space station. The book focuses throughout on the details of Norse mythology, creating scientific rationale for how the Vikings, as they developed, might understand, research and explore their central belief in a big magic tree. The Viking characters in the book are drawn with care, not simply a group of bloodthirsty savages, though many of them certainly have an edge. Those who cross their path are sometimes cast in the role of nice, decent people who have had a mightier and more unpleasant force pressed upon them, but some of the Vikings in the book fit this mould too. Fans of Douglas Adams will appreciate these characters. The All Father Paradox will be of particular interest to those with a passion for Vikings and mythology, and if you like history, should unearth a few interesting directions for further reading. If you like to cross-reference to maps while you read, this will also make you very happy! [I received an advance review copy of this book and have now bought a copy to give as a gift.]
Read more
One person found this helpful
Helpful
Comment Report abuse
See all reviews

WIlliam Hopkins
4.0 out of 5 stars Three words: challenging, imaginative, wonderful.
Reviewed in Canada on 9 October 2018
Verified Purchase
If you’re looking for a book that will make you think, and think hard, you’ve found it. The All Father Paradox is a sprawling saga of Norse gods striking back at the lies of Christian history. This intriguing tale challenges you to identify familiar historical figures recast in a northern light, and to measure your own humble history against a bolder parallel reality redrawn by Odin himself. Hold tight as the All Father Paradox draws you into an alternate yggdrasilian reality where everything is connected by the true trees of knowledge.
Read more
Helpful
Sending feedback...
Thank you for your feedback.
Sorry, we failed to record your vote. Please try again
Report abuse

roy brooke
5.0 out of 5 stars Brings fascinating Norse worlds to life
Reviewed in Canada on 9 December 2018
Verified Purchase
A fascinating and meticulously researched account of Norse worlds that once were, and that might have been. All Fathers Paradox also prompted me to do a couple of research projects of my own so that I could get the full benefit of the many different stories, characters and words. Magisterial.
Read more
One person found this helpful
Helpful
Sending feedback...
Thank you for your feedback.
Sorry, we failed to record your vote. Please try again
Report abuse

Harald
3.0 out of 5 stars Anachronistic
Reviewed in Canada on 6 May 2019
Verified Purchase
I was hoping for a more historically accurate take on the Viking Age but the stories are engaging enough.

Pretty gory and not suited for younger readers.
Read more
Helpful
Sending feedback...
Thank you for your feedback.
Sorry, we failed to record your vote. Please try again
Report abuse

D'Arcy R. Harris
5.0 out of 5 stars Fantastic read
Reviewed in Canada on 29 May 2019
Verified Purchase
Great take on the Viking era and what could have been. Imaginative and very well researched.
Read more
Helpful
Sending feedback...
Thank you for your feedback.
Sorry, we failed to record your vote. Please try again
Report abuse

colleen Carol
5.0 out of 5 stars Came to support the genre, stayed for the actual story
Reviewed in the United States on 2 January 2019
Verified Purchase
I bought this book because I noticed it on Instagram and wanted to be supportive of anyone writing in this genre. I am a practicing Norse pagan myself. Anyway, the book is - bonus - actually good. Not only does it delve into sober and thought provoking aspects of the Norse religion itself, but it becomes a well researched history AND Sci-fi epic by the end. I will definitely watch out for the next book.
Read more
3 people found this helpful
Helpful
Sending feedback...
Thank you for your feedback.
Sorry, we failed to record your vote. Please try again
Report abuse
See all reviews
click to open popover
Unlimited One-Day Delivery and more
Prime members enjoy fast & free shipping, unlimited streaming of movies and TV shows with Prime Video and many more exclusive benefits.
> Get Started