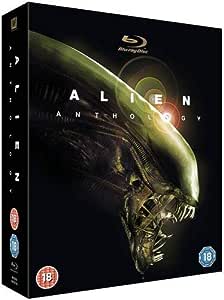 UK import Blu-ray/Region All pressing. With two cuts of each movie and over 60 hours of extras, this Blu-ray box set is the definitive edition of the legendary xenomorphic saga, with stunning HD transfers that finally give these seminal sci-fi classics the treatment they deserve. So, what are you waiting for? Secure that box set, Hudson!

It’s hard to see just where the Alien Anthology Blu-ray boxset could have been improved. Nominally a collection of the four main films in the franchise, what’s actually been bundled together here is one of the finest DVD or Blu-ray boxsets to date, boasting a series of features that genuinely go into a lot of depth about the movies themselves.

And what movies they are. Alien and Aliens are both exceptional pieces of cinema, and rightly regarded as classics in their own right. Alien 3, meanwhile, has to be classed as an interesting and muddled failure, yet it’s still got a lot to like about it. Alien: Resurrection? It’s perhaps the least ambitious of the four films, but in the early stages at least, it’s still with merit.

Each of the films is presently strongly, surprising given the variable DVD versions of each we’ve seen to date. But it’s the mammoth package of extras that set a template for pretty much every other Blu-ray boxset on the market. Spread across six discs, you not only get two cuts of each film, but you get extra features that are as impressive as they comprehensive. Presented brilliantly, it’s an unmissable box set, and you get at least two all-time classics as part of it. --Jon Foster