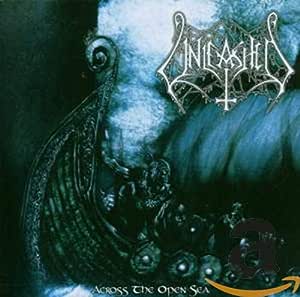 Unleashed Format: Audio CD
4.7 out of 5 stars 13 ratings
See all 12 formats and editions Hide other formats and editions
Note: This item is eligible for click and collect. Details
Pick up your parcel at a time and place that suits you. How to order to an Amazon Pickup Location? Learn more
2 new from £10.78
Buy the MP3 album for £7.99 at the Amazon Digital Music Store.

Page 1 of 1 Start overPage 1 of 1
This shopping feature will continue to load items when the Enter key is pressed. In order to navigate out of this carousel please use your heading shortcut key to navigate to the next or previous heading.
Back
Next
Sold by Amazon Digital UK Limited. By placing your order, you agree to our Terms of Use.

Digitally remastered pressing of this 1993 album, the third from this brutal Swedish Death Metal band. Includes 'In the Northern Lands' and they spooky title track. EMI. 2006.

4.7 out of 5 stars
4.7 out of 5
13 customer ratings
How does Amazon calculate star ratings?
Amazon calculates a product’s star ratings based on a machine learned model instead of a raw data average. The model takes into account factors including the age of a rating, whether the ratings are from verified purchasers, and factors that establish reviewer trustworthiness.
Top Reviews

Tom
4.0 out of 5 stars Thick riffing and mid tempo bombast...
Reviewed in the United Kingdom on 23 October 2007
I'm having a real old school momment right now. I've been listening to some old gear (Malevolent Creation, Hypocrisy, Vader to name but a few) and Unleashed's 1993 third album enevitably cropped up.

Across The Open Sea is a mixed bag. On the one hand it has some of the best, most heavy riffs to come out of 1993. On the other hand, it has some really wobbly momments, and a crazy Judas Priest cover that does it no favours at all.
As I seem to recall Unleashed had just moved labels, or been dropped from their previous label around the release of this album, and that may go some way to explaining the hot and cold nature of the songs contained within it.
'To Asgaard We Fly' the albums opener, typifies the style Unleashed do really well. Chunky riffs from the off, traditional verse/ chorus structure and Jonny Hedlund's growling vocals. Simple yet effective.
Then theres the other side of the coin. In this case second song 'Open wide' is just a "do it by the numbers" sub-death metal tune. And thats the nature of the album.
'The One Insane' has to get a mention for its awesome heavy as hell riffs and catchy lyrics. If Sabbath were a death metal band, they'de have written this.
The title track is a pretty good acoustic piece. A bit strange and disjointing, but taken on its own its ok.
'Breaking the Law', the Priest cover, is terrible. I don't know what they were thinking but it was a terrible move to include it. Hedlund's vocals are not suited to singing this track at all, and the fact the music isn't really that much different from the original, accentuates the wrongness of the vocal style.
Over all Across The Open Sea, is a good solid old school death metal album. I'm not going to extol its virtues just because its Unleashed, I don't think it has a great deal of virtues to be honest, but what it does well, it does really well. For fans of chugging riffs and simpler but memorable days of death metal.
And I still stand by what I've said about their latest offering 'Midvinter Blot'. In the 15 or so years between this album and the new album just mentioned, there really is no difference or progression at all. So buy this, and leave Mid Vinter Blot alone.

Ricardo barron
5.0 out of 5 stars Five Stars
Reviewed in the United States on 6 November 2014
Verified Purchase
Excellent product, I am very happy
Read more
One person found this helpful
Helpful
Sending feedback...
Thank you for your feedback.
Sorry, we failed to record your vote. Please try again
Report abuse