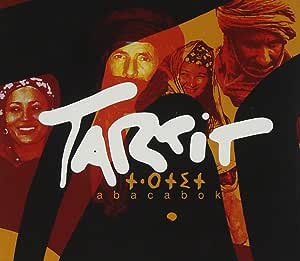 Tartit Format: Audio CD
4.7 out of 5 stars 9 ratings
See all 7 formats and editions Hide other formats and editions
Includes FREE MP3 version of this album.&nbspAutoRip is available only for eligible CDs and vinyl sold by Amazon EU Sarl (but does not apply to gift orders or PrimeNow orders). See Terms and Conditions for full details, including costs which may apply for the MP3 version in case of order returns or cancellations.&nbspComplete your purchase to add the MP3 version to your Amazon music library. Provided by Amazon EU S.à r.l.
New & Used (19) from £3.90 + £1.26 Shipping

Nothing is more evocative of the fascinating expanses of the Sahara desert than the music of Tartit, a Tuareg band consisting of five women and four men residing in the Timbuktu region. Tartit play hypnotic, trance-inducing music: the women sit down, sing, and play cyclical rhythms on their tinde drums, while the men sing and play string instruments, acoustic and electric. The men are veiled, the women aren't. Tuareg society is one of the few throughout Africa in which women are allowed to choose (and divorce) their husbands.

The band was formed in a refugee camp, during the Tuareg uprising in the early '90s. Tartit have toured Europe several times (including the UK), most recently as part of the Desert Blues shows. The album was recorded in Bamako and in the northern Mali desert by Congotronics producer Vincent Kenis, on his mobile studio. The track 'Achachore I Chachare Akale' features lead vocals and guitar from Afel Bocoum, who has played with the legendary Ali Farka Toure in the past.

(4 stars) It is the stark, intense beauty of the stripped-down material that impresses most. -- The Times Knowledge, (Nigel Williamson), Oct 28 - Nov 3 2006

Another reminder of the extraordinary wealth of music that exists across Mali and the Sahara. -- Songlines, (Robin Denselow), November/December 2006

4.7 out of 5 stars
4.7 out of 5
9 global ratings
How are ratings calculated?
To calculate the overall star rating and percentage breakdown by star, we don’t use a simple average. Instead, our system considers things like how recent a review is and if the reviewer bought the item on Amazon. It also analyses reviews to verify trustworthiness.
Top reviews

Martyn
5.0 out of 5 stars Great blend of desert music
Reviewed in the United Kingdom on 20 June 2008
This album features a combination of very traditional-sounding songs, with arrangements sometimes as sparse as just a drum, handclapping and vocals, and also some more developed numbers familiar to fans of Tinariwen or Toumast. Both formats work extremely well.

In terms of the more traditional songs, there is a combination of male and female vocals in some, more often one or the other takes the lead. What's good is that the production keeps everything level, so neither the vocals or instrumentation overwhelms - occasionally with 'world music' the vocals can sometimes be pushed too strongly, whereas here they are just one other instrument. The songs set up a hypnotic effect and, to use a cliche, really do have you closing your eyes and imagining the scene around the campfire, and apparently the more traditional sounding tracks actually were. One track in particular, 'Tihou Beyatine' really brings this across, with ad-lib vocal contributions and even what sounds like general chatter in the background.

Other tracks feature electric bass and desert-blues style eletric guitar which, though not quite as gritty as Tinariwen, is incredibly uplifting and beguiling, weaving melodies over the other traditional elements. One highlight is the second track 'Ansari', which within half-a-dozen bars had charmed its way into my World Music Top Ten Tracks of All Time - no mean feat.

There are many fantastic tracks on here, though, and its balance of purely traditional songs and those with one or two electric instruments prevent it from becoming an effort to listen to.
Read more
7 people found this helpful
Helpful
Comment Report abuse

Alwyn R. Harrison
5.0 out of 5 stars Real desert music
Reviewed in the United Kingdom on 10 May 2008
This just arrived, it's Saturday morning and I'm still half asleep but, turned up loud, Abacabok is sending shivers down my spine.
If you're looking for Malian or Northwest African music, forget Tinariwen and Toumast - they're great live but this is the real thing: field recordings from the desert performed by a band of five women and four men on traditional instruments (although there is electric bass on two tracks, it doesn't sound too out of place).
If you love the Desert Rebel sessions, Bassekou Kouyate and Ngoni Ba, and Ali Farka then this is for you.
Read more
9 people found this helpful
Helpful
Comment Report abuse

Rabber Exile
3.0 out of 5 stars good music
Reviewed in the United Kingdom on 10 January 2011
this is a good cd but lacks the excitement of say Tinarawen, maybe a bit too repetitive for my taste, but I am glad I bought it any way
Read more
One person found this helpful
Helpful
Comment Report abuse
See all reviews
Unlimited One-Day Delivery and more
Prime members enjoy fast & free shipping, unlimited streaming of movies and TV shows with Prime Video and many more exclusive benefits.
> Get Started